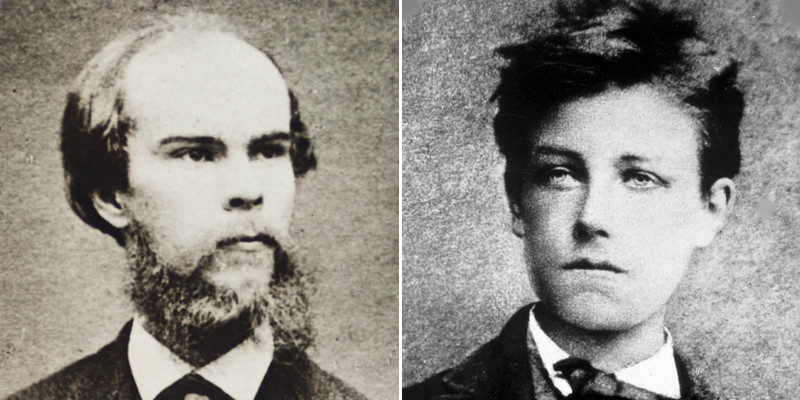 Charleville, one night in August 1871. A young man, by the light of a candle, his back bent over his desk, is writing. He is 16 years old, his name is Arthur Rimbaud, and he has already written many beautiful poems in the months and years before. But tonight, Rimbaud is not writing a poem. He writes a letter: a long missive that he will put in an envelope thickened with some poems of his own that he will join to the mail. Before posting it, he carefully writes the recipient’s address on the envelope: 14 rue Nicolet, Paris. This was the address of the aspiring Parisian poet, nine years his senior and already quite well established in Parisian literary circles: Paul Verlaine.

Verlaine, who was travelling at the time, did not receive this letter until September. But, impressed by the texts of this mysterious Ardennes author, he replied without delay. He attached not poems but a train ticket to the letter, inviting the young countryman to visit him in Paris.

A rather cumbersome new friend

As soon as Rimbaud arrived in Paris, in the autumn of 1871, the destiny of the two men became linked. Verlaine took the young man under his wing and took him with him to the “Dîners des Parnassiens”, the “Club des Vilains Bonshommes” and other literary evenings to which the Parisian had access and in which, moreover, he was well recognized and respected. The young man from the Ardennes was to impress by his verve, his audacity and the modernity of the poems he was to declaim before the assemblies. On the other hand, he was to shock by his behaviour and his provocative remarks, not listening to the declamations of the other poems, insulting the writers and constantly provoking the assembly. Thus, little by little, Rimbaud and – by force of circumstance – Verlaine found themselves excluded from most of these Parisian literary circles.

But these are not the only circles from which Verlaine, because of Rimbaud, is excluded. He also abandoned his young wife (who was only one year older than Rimbaud), who was pregnant at the time. One day, when Mathilde was ill, Paul Verlaine went out to buy her some medicine at the local pharmacy. When he came out of his house, he found Rimbaud sitting on a curb. He will use all the power he has on the future father to force him to follow him and to leave Paris. Verlaine will never bring back the medicine his wife asked for. From there, the two men begin their journey of initiation, one of the most famous journeys in the history of French literature.

The two men set off aimlessly along the roads and paths of France, Belgium, Brussels and even England. During these two years of decadent wanderings, where absinthe and literature take a central place, the two poets will write some of their most beautiful pieces. The affair between Arthur Rimbaud and Paul Verlaine became a tumultuous love affair. They often quarrelled, and more and more violently.

In the spring of 1873, the two friends moved to London, where many former French Communards had found refuge. Verlaine, who had not played a leading role in the Parisian barricades in the spring of 1871, claimed to be a supporter of the Communard ideals and made some friendships. But the already tumultuous relations between the Parisian and Ardennes poets deteriorated more and more. At the beginning of July 1873, Verlaine left Rimbaud in London and fled to Brussels. He needed to put some distance between him and the provocative young Ardennes poet who was always pushing him to the limit. He embarked on a ferry that took him to Antwerp, then got on a train to Brussels. A few days later, Rimbaud made the same trip and joined Verlaine in the hotel “À la Ville de Courtrai”, a filthy establishment in the rue des Brasseurs, a stone’s throw from the Grand Place in Brussels, where he stayed. It was 8 July when Rimbaud joined Verlaine. The two poets are together in the Belgian capital. In two days, on July 10th, the final act of the Verlaine/Rimbaud relationship will be played out. The “Incident of Brussels” is underway…

Discover the continuation – and the end – of their tumultuous story by signing up for our Brussels Crime Tour.