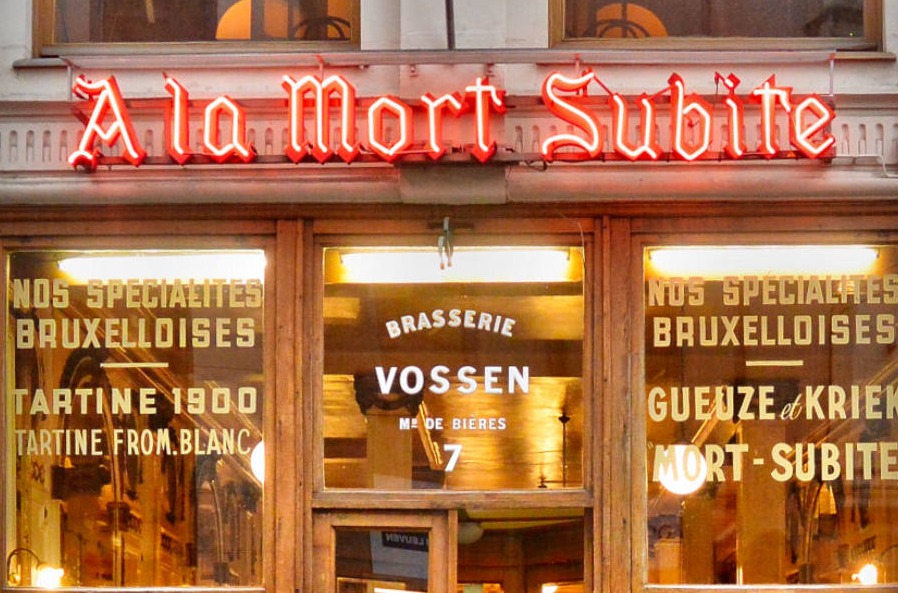 In the beginning, there was a bar. This bar was called “À la Cour Royale” (At the Royal Court). It was located at the top of rue d’Assaut. Some people say that it already existed in the 1840’s! It will become “À la Mort Subite” (At the Sudden Death) through a series of events and anecdotes that we will tell you here …

At the Royal Court

At the beginning of the 20th century, the place was taken over by Théophile Vossen. At that time, it was mainly frequented by professionals who gravitated around the National Bank, a stone’s throw away. They used to spend long hours there waiting for the counters to open or for an event requiring their intervention at the bank. Thus, brokers, cashiers, stockbrokers and many others, killed time by paying themselves tours of Gueuze. And by playing dice….

The Pitjesbak, ancestor of the 421

Their favorite dice game was the Pitjesbak, now known as “421”. In each round, the loser was eliminated and the other players continued the game without him. The loser was called “The Dead” because he did not participate in the rest of the game at all. When time was running out and an event required urgent intervention by the Banker, the players would finish the game with a single roll of the dice. Do you see the deal coming? This variation of the game was called “Mort Subite” (Sudden Death).

The establishment was nicknamed, ” À la Mort Subite ” in common parlance. Very soon, Théophile Vossen also gave the name “Mort Subite” to the beers he brewed in his brewery in the rue des Capucins. It was after the café was forced to move during the construction of the railway junction in 1928 that he officially took this name.

Today, the café “À la Mort Subite” is located on rue Montagne aux Herbes Potagères and is still run by the Vossen family. The dice game is a little less common, but excellent Gueuze and other Brussels products are still served there. With Brussels By Foot, we can organize a gourmet stop there during a guided tour with your group.